When I think of a projector the first thing that comes to mind are those crappy ones that your old primary school teacher used to show diagrams on the wall. 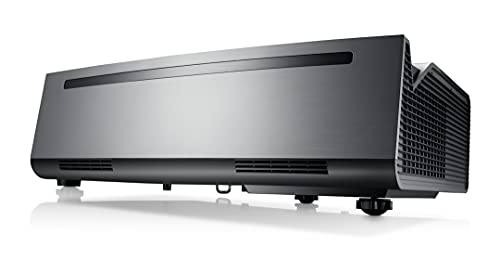 Well, obviously, technology has advanced a hell of a lot since then and now we have what I can only describe as an ‘absolute beauty’ from Dell.

The Dell S718QL brings a UST (Ultra Short Throw) 4K UHD projector to the table. I wasn’t really sure how it would work in terms of quality, but I can assure you the quality is 100% superb.

I noticed looking around online that Dell have said that these projectors are mainly used for business or educational purpose, but this statement shouldn’t stop you from using it as an in home entertainment system. That’s what I did and I was not disappointed.

We’ve all seen and used projectors before so we have a basic understanding of how they work. Normally you install them at a distance either from the ceiling or on a shelf which, in terms of having one in the home, can be a pain if you haven’t got the longest or tallest of rooms.

Possibly one of, if not the stand out feature for me is how all these installation worries have been completely thrown out due to the lasers and how the image is thrown by the Dell SQ718QL.

Providing you have a wall big enough for the screen, which is at the lowest point 100 inches diagonally at around 3.9 inches away from the wall, this projector can be setup anywhere.

Another great advantage of the image being projected from a short distance is that you never have anyone stepping in the way of the image or have objects obstructing it.

You would literally have to lean over the top of the projector to block the light which, let’s be honest, is extremely unlikely to happen.

You also won’t get blinded from the other side of the room, so if you are using this model for presenting in the work place then you don’t have to worry about having your retina scorched off in the middle of your big proposal.

The display for me is where the Dell S718QL really shines through (no pun intended) as the picture was perfect. I tested various pieces of equipment on the projector from my Macbook streaming content, PS4/Xbox One and even Sky Q.

Being a gaming website the first to try was the PS4 and Xbox One just to see how well it would handle them. I was not disappointed I can tell you that.

The PS4 looked a lot better than the Xbox One, but I think this is down to the lightening effects used on the PS4.

The first game I tried, since it’s suddenly made a comeback in my life, is Ubisoft’s The Division due to the large map sizes and constant gameplay of running and shooting.

The projector held up exceptionally well with handling colouring and lighting effects as the game moved from day to night. The Division was tested on my Xbox One. It is strange because when I mentioned playing a console on the Dell S718QL a lot of people said there would be an insane amount of input lag from it.

I never found this to be the case in terms of playing games such as The Division, but when it came to playing a first person shooter you could certainly see the difference. I can imagine that using a PC for gaming on it the input lag would rile a few people up, but then again PC gamers can be very picky.

Now as I don’t have an Xbox One X or a PS4 Pro testing the 4K/UHD was down to my good old Sky Q box. Due to me testing the projector all day over the weekend the obvious choice of programming was the Premier League. Sky Q now supports UHD and on the Dell S718QL it looked glorious.

The contrast of colour was brilliant and the image constantly looked crisp and clean. A problem you can face with laser projectors is what people call rainbowing or the rainbow effect. This is when you’re watching something and start moving your eyes across the image you get a sort of red, green and blue trail following your eyes. I tested this out while watching the football and never seemed to notice it. I’m not sure if this was because I was watching in UHD or if I wasn’t doing it right which I find hard to believe as I move my eyes pretty regularly, but I never once seemed to find this issue.

The screen has a native resolution of 4K UHD (3840 x 2160) and can project a screen size of up to 130” diagonal. The screen size is adjusted by moving the projector closer or further away from the wall but in doing so you never lose any quality.

Checking out the stats of the Dell S718QL you get a good judgement of how long the projectors will last using a laser in comparison to a standard bulb projector.

Dell reckons the S718QL will last around 20,000 hours before being replaced and this is with having the equipment on constantly all year round. Even using this is in a commercial or business environment I doubt you’re going to be running it 24 hours a day.

But if for whatever reason you are then you have 20,000 hours worth of life to play with. Of course, this is much higher when the projector is being used in normal mode but it also comes with an Eco Mode for you to use, which again will extend the lifespan even further.

One of the major features of using a laser engine compared to the standard bulb is the degradation of image quality over time.

A standard bulb projector loses brightness quicker and over a shorter period which then results you needing to get the bulb replaced quicker which isn’t always the cheapest. However, a laser projector will last much longer and take a longer period of time before you start to see the picture degrading or losing brightness.

As you can see from the specifications above the projector comes with a good amount of connection options. Having 3 HDMI posts with one supporting HDR has its advantages as you can use each input together as a split screen.

Doing so however will limit the picture quality to Full HD which lets be honest isn’t the end of the world. You get a couple of USB ports to connect to and browse through files on the device you’ve connected as well as allowing you to charge devices using them such as mobile phones etc.

There is also a 3.5mm Audio-Out for you to connect a pair of headphones I suppose or a pair of speakers.

The best part is that if you don’t have a speaker to connect using a 3.5mm jack then the Dell S718QL has Bluetooth built in.

This means you can connect your Bluetooth sound bar or speaker wirelessly and have the sound come through that instead. The projector itself does have a couple of built in 6 watt speakers which do a decent job in playing sound but I can imagine if the room was to become quite loud then these would be cancelled out.